Now before you scold me for not recommending OBS right out of the gate, just hear me out. Twitch Studio might be a joke for a lot of professional streamers out there, but it's far from it and probably a better choice for anybody new to streaming. OBS is probably the best software out there for streaming right now, but it's also the most complex and can be very intimidating to new users. Twitch Studio can get you from "what's Twitch?" to "Hey I'm live!" in minutes while covering all of the basics of streaming. It requires no knowledge to start using, it walks you through the setup process, it has all of the features any new streamer would need (and some advanced settings if they want to do some manual tweaking), it's lightweight so it won't interfere with your game's performance, and it's 100% free. 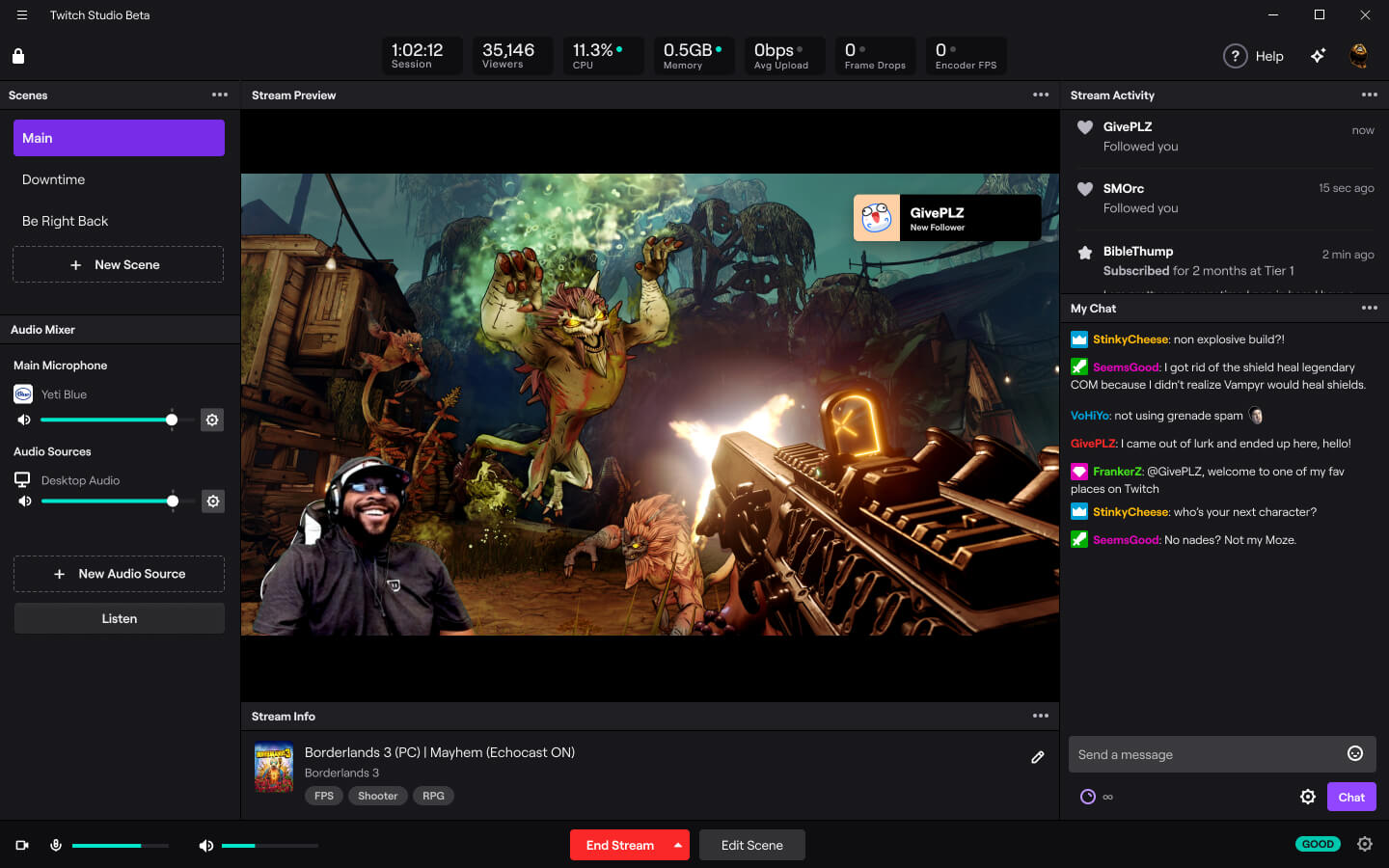 Twitch Studio is perfect for those of you who want to try livestreaming, but don't want to make any time or money investment into it because you're not sure if it's something you'll like or not. It's a pain-free way of dipping your toe into the water and if you don't like it, you didn't spend a lot of time or effort finding out you don't like it. On the flip side, if you find you really do like streaming then you can continue using Twitch Studio while you learn how to use a more advanced setup with OBS (I'll even include some free resources to get you started in learning how to use OBS). You can keep streaming and having fun and then in your free time you can learn at your own pace instead of having to learn before your first stream, doesn't that sound less intimidating?

Personally, I use both OBS and Twitch Studio and they each have their place and work great. I use OBS on my main gaming PC because I do have a more complex setup and need the extra features only OBS can really offer me, but on my VR PC I have Twitch Studio installed because I don't need anything fancy at all and it's just a dirt simple setup:

No extra sources needed, all of the alerts are built in, everything works out of the box with no special configurations. It's nice just having a setup that's ready to stream when I am.

So if you do find yourself wanting to livestream but are either confused, scared, or intimidated then give Twitch Studio a try because livestreaming shouldn't require learning new skills to see if you're interested. It's perfectly okay to use training wheels when you're learning how to ride a bike, especially if you're not sure whether you want to ride a bike or not.

If you find yourself with questions and need some help, just want more guidance or advice, or want to talk about livestreaming in general then feel free to reach out to me either via Twitter, e-mail, or you can find me on the EposVox Discord server where we discuss livestreaming, OBS, Twitch, and more.

Go out and do good things! 👍
-KuJoe

Today I want to showcase one of my many projects called imgs.one which is a free public image hosting platform I've been building. I'm especially proud of it because it's 100% custom built with a really lovely cloud storage + CDN backend that makes it very resilient (and cheap to run).
Looking to make a career change to IT? Currently working in IT but looking for something different? Want to do it for free or almost free? Here are some budget resources based on some observations I've made over the past few years while in IT.